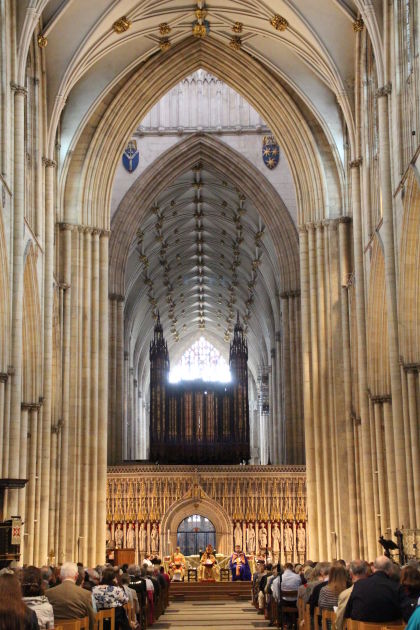 Before the Coronavirus COVID-19 outbreak the Diocese of York had expected that a number of deacons would have been ordained priest by Archbishop Sentamu in York Minster on Sunday 7th June, as one of his final acts as Archbishop of York.

As we now know, this did not happen. The law requires that an ordination service should include Holy Communion and be open to the public to attend; while public worship in the Church of England remained (and remains) suspended, such a service was impossible.

Instead, it is hoped that services to ordain new priests will be held around the Diocese in parish churches during the autumn of 2020.

The candidates are all currently serving in their 'title parishes' as Deacons and will continue to do so after their delayed ordination as priests.

We had also expected that 12 people would be ordained Deacon in York Minster on Sunday 5th July, but we can now confirm that this service too will not take place.

Those who were going to be made deacon will instead be licensed on that day by an approved online process as lay ministers (and receive any stipend and housing as planned) to serve in that capacity until it is possible for them to be ordained in York Minster, which we hope will be in late September.

Dates for all these ordination services will be published as soon as it is possible to confirm them, together with any necessary provisions and advice for how to attend them.

It's hoped to introduce our new Deacons in July, just as they begin their ministry, with our prayers, albeit not quite in circumstances any of us would have chosen.