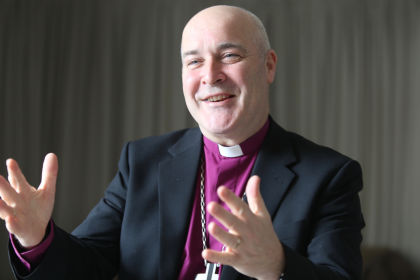 Diocesan Synod met online via Zoom as dusk fell on an autumn evening at the end of September.

Meeting for the first time since November 2019 due to the disruption caused by the Coronavirus pandemic, this was a Synod like none before it.

The planned meetings on the 21st March and the 20th June had been cancelled; there had been no opportunity for the Synod to say its farewell to Archbishop Sentamu in March prior to his 7th June retirement.

Since it was clear that the Coronavirus restrictions were going to be in place for a longer period than originally hoped, suitable protocols and technology had been developed to allow the 29th September meeting to proceed.

While this was the first Synodical appearance of new Archbishop of York Stephen Cottrell, it was also necessary to devote much of the available time to clearing a backlog of ‘business’ and technical items that had not been agreed in June or March, and to enabling the working of diocesan structures in unforeseen circumstances in the coming months.

The Archbishop was invited to make his first Presidential Address to the Synod at the end of the agenda rather than at the beginning, so that business items could be resolved before turning to the more uplifting and inspiring work of welcoming him and sharing his vision for his first months in post.

THE CLERGY COVENANT FOR WELLBEING

Archbishop Stephen’s first act was formally to proclaim the Clergy Covenant for Wellbeing as an Act of Syod, having been formally passed by the Church of England’s General Synod in February 2020.

The Covenant is the fruit of several years’ work and much debate in General Synod; it is the expressed view of the mind of the Church of England on issues relating to clergy care and wellbeing.

The Working Party who devised it “Hope that the work of supporting clergy in their ministry will thus become an integral part of the life of the Church of England at all levels, something that is part of the DNA of every aspect of our mission and ministry.”

Synod approved proposals to enable two non-parochial congregations in Hull, at Kingswood and Longhill, to elect representatives to serve on their Deanery Synod. Both are established under ‘Bishop’s Mission Orders’ which are outside parish structures and hence need this measure to participate in the life of the Deanery.

Bishop of Whitby Paul Ferguson introduced a brief update on some aspects of our programme of transformation and strategy.

The Generous Giving Team is forging ahead with the introduction of the Parish Giving Scheme (PGS) and a re-cast of its plans to accommodate the new realities of the pandemic, in which its previous attendance at PCC and other meetings is no longer practical. In spite of two of its members having been furloughed and the decision of one of the two Advisers to retire at the end of his initial two years in post, coupled with technical difficulties experienced by PGS, the team’s online workshops and resources are proving very popular as parishes recognise the value of the support offered in promoting generous giving.
dioceseofyork.org.uk/generosity

Multiply: Reaching those in their 20s to 40s

Director of Making & Nurturing Disciples the Revd Richard White reported that the thirteen full-time ‘Multiply’ ministers original planned are all now in post and beginning to see the emergence of the new worshipping communities that were the opening aspiration for the project; while the first Growth Fund grants begin to boost the work of local parishes, conversations continue about creative opportunities to seed work amongst those from their 20s to their 40s in more contexts, formats and locations.
multiplyreach.org

Mustard Seed has progressed rapidly from an aspirational plan last time Synod met to a reality, with Heather Black coming into post as Team Leader early in 2020. Heather has moved rapidly in spite of both the pandemic restrictions and her own family move from Middlesbrough to Hull; she is a diligent user of social media to great effect in raising the profile of the project within the Diocese, and has succeeded in getting the first two ’Stepping Up’ programmes going in Hull and Middlesbrough in spite of everything (other will follow soon in Bridlington, Scarborough and Redcar & Cleveland).
mseed.org

The Synod formally Received the Annual Report and Accounts of The York Diocesan Board of Finance Ltd for 2019 (YDBF is the statutory body that manages the finances and other legal responsibilities on behalf of the Diocese).

Diocesan Director of Finance Kathryn Rose presented went on to present a complex picture of the current financial situation in the Diocese, in which income to both parishes and the Diocese has been affected by the pandemic but to an extent that is difficult to calculate: the current year’s Free Will Offering payments from parishes to our Diocesan Common Fund appear to have fallen by about 10% in comparison with the previous year, but anecdotally it seems likely that this situation will deteriorate further in the coming months.

While the pandemic has brought some incidental reductions or delays in expenditure (eg on property maintenance) this is expected to be of short-term benefit, if any, and has to be seen in the context of pledged Free Will Offers having actually fallen from 2019 to 2020 before the pandemic struck.

In order to relieve pressure on parishes, Diocesan communication about Free Will Offer this autumn will not request a full FWO process but rather assume that the aspiration for 2021 in each parish will remain the same as that for 2020 unless the parish positively states otherwise; this will however be accompanied by advice that as Diocesan income falls, there will inevitably be consequences including a reduction in the number of paid posts both for Diocesan staff and for clergy.

The Synod formally received a number of annual reports for 2019 from statutory and other bodies within the Diocese, including:

These reports will shortly be available on the Diocesan website, www.dioceseofyork.org.uk.

Archbishop Stephen sought and won Synod’s approval for the legal documents which enable the Suffragan Bishops of Selby, Whitby and Hull to carry out some of the duties and responsibilities that are his as Archbishop of York. He noted that the Deanery of York is returned to the care of the Bishop of Selby, and that he generally wishes the Suffragan Bishops to hold more responsibility than hitherto, for reasons he set out in his Presidential Address (see below).

Here are some key extracts:

“I am delighted and humbled to be the 98th Archbishop of York, but I know I begin my ministry at such a time of hardship and challenge. Many of the familiarities of our life are being stripped away and this, of course, affects the church as well. Many, many people in our diocese and our nation have not been able to gather for worship, not received the comfort of the sacraments, have had to have weddings, baptisms, confirmations and ordinations postponed; even funerals have been affected and sometimes bereaved families have had to sit in separation from each other or not even be able to attend the funeral at all.

“All this is enormously hard and the church itself has had to make painfully difficult decisions about how we order our life and respond to both the coronavirus itself and the regulations imposed by government. We have not always got it right. But I would like to make my first act as president of this Synod to thank the bishops archdeacons, Peter Warry, the diocesan secretary and his staff at the Diocesan Offices, and the clergy and people of this great diocese for their resilience and creativity in sustaining the life of the church in these most difficult circumstances, and particularly for the hundreds and hundreds of initiatives, large and small, where the church has reached out to its local community to alleviate suffering, be alongside people in isolation, and offer the healing medicine of the gospel.

“...All my instincts as a minister of the gospel is to want to get stuck in by getting out and about in local communities, meeting people, getting to know them and sharing the good news of Christ as best I can. This is hard to do in these constrained times, and I’m doing the best that I can on zoom conferences and in whatever actual meetings are safe and possible. But also, as Archbishop of York, I have responsibilities for the northern province and for the nation that mean I cannot be bishop to the diocese of York in the same way that I have been bishop to other dioceses. That is why I am delegating and sharing episcopal responsibilities with my colleagues.

“This, I hope, will itself be a sign that ministry is shared and should always be collaborative. But it also means change for the diocese as you get used to more things being led by the other bishops. I believe my role will be much more about casting an expanded vision, reminding us of our core vocation as disciples of Jesus, and then giving my time and energy to very specific projects and initiatives within the diocese. Its day-to-day running will be in the hands of my trusted colleagues.”