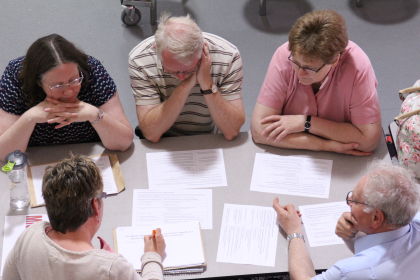 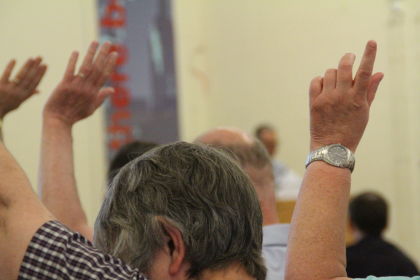 Young Vocations, how to share and maximise the benefits from our gifts and resources, and the official reports for 2016 of some of the key work groups in our diocese were the principal items on the agenda.
For his Presidential Address the Archbishop returned to the theme ‘The Church on Earth is the Embassy of Heaven’, directing Synod members to printed copies of his November 2016 Address of that title. He outlined his plan for copies to be made available to every church member in the Diocese shortly, with the intention that congregations and other local groups should form ‘prayer triplets’ to pray through their reading of it together.

Archbishop Sentamu particularly wants church members to share and focus on the question of how our individual and collective giftings glorify Christ, and edify his body, the Church (from 1 Corinthians 12 and 14)? He invited Synod members to model the process of discussion and then prayer around these questions in local ‘triplets’ within the hall for a few minutes.

The Revd Jackie Doyle-Brett is one of our General Synod Members but introduced herself to Synod as Diocesan Adviser on Young Vocations, a post she took up at the same time as becoming Vicar of St Luke’s, York a year ago.

The background to her work includes factors such as the Church of England’s Renewal & Reform programme, a growing need for lay leadership in the church and the intention to increase the number of Ordinands by 50% over the next ten years.

Jackie invited members briefly to discuss how many people they thought are involved in the process of discerning vocations to ordained or other ministries amongst worshippers of any age; the number of people formally in the diocesan vocations team turned out to be 18 but one Synod member stole Jackie’s punchline by correctly pointing out that we are all members of that particular team.

She outlined a programme of events and resources offered by the Diocese in order to support a growing vocations culture, but stressed that we all have a role in tending the vocations ‘garden’, which should include owning our responsibility for spotting and nurturing vocations, including this in planning the life of our churches, praying and preaching about it, looking out for signs of God’s calling in others, and helping others to hear that call.

Current and future plans for developing young vocations include building up links with our own Church secondary schools and with Higher Education Chaplains, continuing to grow the ‘God Calling’ days at which young people are encouraged to seek God’s plans for them, holding residential weekends for those seriously exploring ordination, ‘Young Vocations Breakfasts’ and deploying young curates as mentors.

Jackie showed a graph demonstrating that York currently occupies fourth place in the ‘league table’ of 42 dioceses measuring the percentage of their current ordinands under the age of 32. Although she is loath to appear competitive, just one more under-32 ordinand would have propelled York to the top!

GENEROUS CHURCHES MAKING AND NURTURING DISCIPLES
– THE NEXT FIVE YEARS:

Archdeacon of York Sarah Bullock reminded the Synod of the diocesan vision to make and nurture disciples; three goals (reach, grow, sustain) emerged from the strategy consultation and themes from the feedback included enhancing partnership for mutual resourcing – how can we enhance the way we work in partnership to resource one another to carry out God’s work.

She invited Synod to break up into deanery (or in some cases multi-deanery) groups to discuss two questions:

• Which three things will contribute most to your capacity as a church / deanery to give more focus to mission?

• What can ‘central support’ [i.e. the diocese, the Archbishop’s Leadership Team etc] do that will really help you in this?

Energised by a coffee break between the two parts, Synod members returned completed feedback forms which are now being analysed, and returned to offer a few reflections on the task:

Which things might contribute most to your capacity as a church / deanery to give more focus to mission?

• Thy Kingdom Come – the international wave of prayer that helped parishes across the deanery develop, using information channeled by the diocese.

• Not having to worry about money all the time.

• Church is a team sport not a spectator sport.

• Training and support for clergy, greater accountability of clergy, more activity in deaneries and less in York.

• Investing in having far more curates, with different roles and different time commitments, funded to add reach and capacity.

What can ‘central support’ do that will really help you in this?

• A central resource for ‘Human Resources’ for getting admin support to, for example, local Children and Youth workers.

• A strong theme was the need to change mind-set by hearing people’s stories – what can central resources do to help? There are lots of people with stories to tell and lots wanting to hear, but how to connect?

• Succession planning and helping churches develop teams of people, through training not only laity but clergy to enable them to use teams more effectively. Hearing inspirational preaching from the centre.

Diocesan Finance Manager Catherine Evans gave a review of 2016, a year in which the generosity of Freewill gifts paid into our diocesan Common Fund had not kept pace with the level of offers made at the outset of the year. Despite much to give thanks for, this had resulted in some of the plans made for 2016 not being realised.

Chair of the Diocesan Board of Finance Maureen Loffill thanked the Finance team for their work in preparing the annual Accounts which were unanimously received by the Synod.

These reports to the Synod, which are required by law, and others will be available to download and read on the diocesan website at www.dioceseofyork.org.uk/synodreports as they are received.