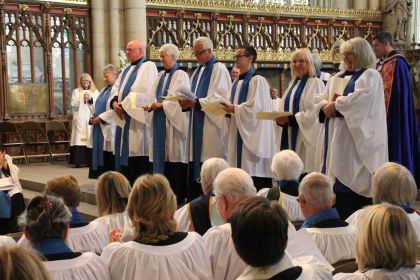 The Archbishop of York, Dr John Sentamu, admitted seven new Readers to serve in parishes in the Diocese of York, during a service in York Minster on Saturday 7th September.

Readers (often identified by the blue scarf worn with their robes at some services) are lay ministers who lead acts of worship, and help reach others with the good news of Jesus Christ through explaining the Bible and Christian belief. Through their preaching and teaching and in their pastoral work, Readers help others grow through the Gospel message, and share in sustaining the Church’s work of caring for people in Christ’s name.

Those admitted on the 7th September have trained with the York School of Ministry which involves both formational training and academic study.

The new Readers, with the parishes in which they will serve, are:

Diocesan Warden of Readers the Venerable Sam Rushton said, “A Reader is someone who's found that God is using their gifts within their own church family as both a servant and a leader, and it's a privilege for the church to support and recognise that work and role, and to hold them in our prayers.

“People of all ages and backgrounds become Readers, and of course their Christian witness goes out with them into God's world during their daily lives."