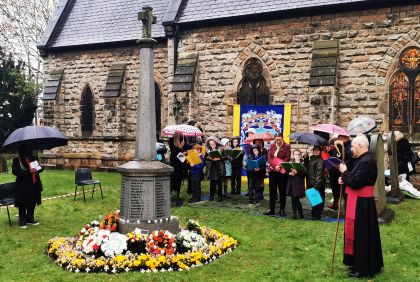 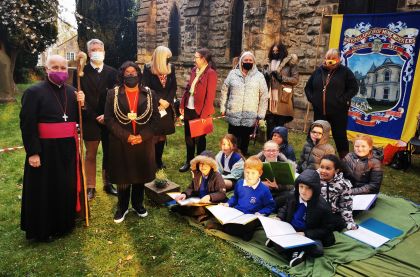 The Archbishop of York, Stephen Cottrell, joined with local people, civic representatives and families descended from those involved in the Peckfield Colliery disaster of 1896 at a service to commemorate its 125th anniversary, at St Mary’s Church, Micklefield, on the evening of Friday 30th April 2021.

The service recalled the 63 men who died, mostly as a consequence of a huge blast at about 7.20am on the 30th April 1896, caused when a pitman’s tallow candle ignited dust disturbed by an earlier escape of gas and explosion. The mine had been open for 19 years with a good safety record by the standards of the time.

The anniversary day began with a socially-distanced outdoor gathering to place 63 named crosses at the memorial to the disaster in St Mary’s Churchyard, Micklefield, followed by the tolling of the church bell 63 times from the time of the explosion at 7.20am. Bells were also tolled in the other Yorkshire and Derbyshire home parishes of the pitmen who died.

The Archbishop preached during an evening open-air service at which 63 lights were placed around the churchyard memorial; Lord Mayor of Leeds Councillor Eileen Taylor led the laying of wreaths and the choir of Micklefield Church of England Primary School led the singing of hymns including ‘All My Hope on God is Founded’, ‘Amazing Grace’ and ‘Abide With Me’.

Archbishop Stephen said, “This has been a solemn day for those whose relatives’ names are on that monument, for the people who live today where those pitmen and their families lived, and for everyone whose lives have been shaped by the mining industry down the generations.

“I thank God for his love and his care for those who died, who were hurt and whose lives were scarred by injury and loss – but as I read the story of that day I give thanks too for the acts of bravery and heroism as men and women reached out to each other, up on the surface and down under the ground.

“We know that 11 young men were knocked unconscious by one of the underground blasts and when they came round and began their escape, they asked one of their leaders to pray for them. And we know that miners, engineers, doctors and local people flocked to Micklefield to offer help. In this way - through human hands and voices – God was with those who suffered that day as he is with us this evening as we gather to remember.

“Micklefield is a growing and bustling place today, more than 30 years after the pit closed, and we should remember what happened in 1896 and how people responded to it – there are memorials here at the church, at the school, at the Blands Arms, and there’s been a new leaflet about the disaster produced locally – but the best memorial is that life goes on in Micklefield, thank God.”