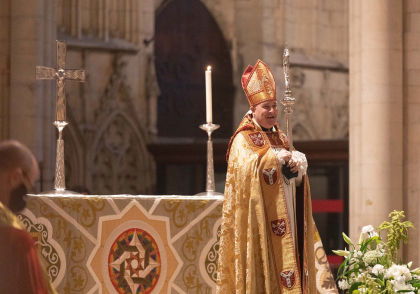 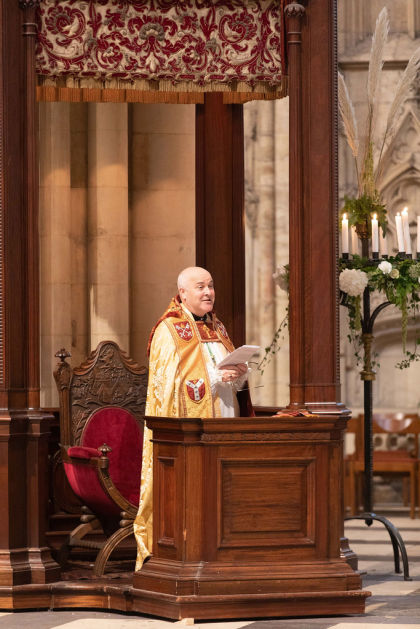 The Most Reverend Stephen Cottrell was enthroned as the 98th Archbishop of York on the Feast day of St Luke, Apostle and Evangelist, Sunday 18 October at York Minster during Choral Evensong.

Much of the service was sung by the adult singers of the Minster Choir, and included readings, music and prayers. Elements of the service were based on previous historic enthronements and Archbishop Stephen took his oath on the York Gospels.

Held under careful Government and Church of England Covid19 secure guidelines, this was a ticketed service with strict limits on the numbers attending.

Archbishop Stephen had previously expressed hope that an improvement in the pandemic might enable a large public enthronement service to be held at York Minster. However, three months into his role and with the country still on high alert, Archbishop Stephen has completed the final stage of becoming an Archbishop, taking up his seat in the Cathedral and Metropolitical Church of St Peter in York, in a simple service of Evensong.

During his sermon the Archbishop said, "This is a time of huge challenge, uncertainty and fearfulness in our world. I am conscious that I’m standing in the shoes of some very great forebears, not least a man like William Temple who during the darkest hours of the Second World War with others dreamed of what the peace may look like and how literally devastated cities would be re-built, but also a moral vision for the rebuilding of a nation. He was one of the architects of that post-war consensus that gave birth to a welfare state and to that NHS that we stood out on the streets and clapped every Thursday Evening during the hardest days of lockdown.

"What were we clapping? Well, yes, all those who worked in our health service, but also all the others whose labour kept us going: those who stack supermarket shelves; volunteer in foodbanks; drive delivery vans, or collect prescriptions. But I also think we were clapping a set of ideas that are very dear to us: a belief about our common humanity which says that we belong to each other and have a responsibility to each other and that we are at our very best when we build communities of love which look out for and cherish each other, so that there is healthcare for everyone, not just for those who can pay.

"It is easy to take these ideas for granted. But they have an origin. They don’t come from our observation of nature nor from the customs and cultures of most human communities. They flow directly from the revelation of God in Jesus Christ who by his sharing in our life and through his death and resurrection has formed us into a new humanity, and brought us into a community of giving and receiving love."