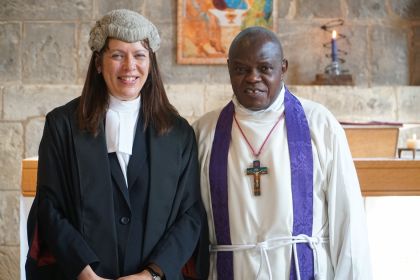 The Archbishop of York has appointed Louise Connacher of Lupton Fawcett LLP as Registrar for the Diocese of York and Legal Secretary to the Archbishop, after seven months as Acting Registrar following the sudden death of her colleague Caroline Mockford in March this year.

Louise studied Law at Emmanuel College, Cambridge and then spent a year at York College of Law before completing her legal training at Addleshaw Sons & Latham in Manchester, specialising in employment law. In May 1996 she moved across the Pennines to join Lupton Fawcett.

Archbishop Sentamu said, “Louise has done exceptional work and has been a great blessing to the Diocese in these difficult months while we – and she – came to terms with the sudden death of Caroline.

“It’s a great blessing too to be able to confirm her appointment now and I know that she will continue to be a source of wise counsel and sound advice.”

Louise is a keen bell ringer and lover of country pubs and Yorkshire-brewed real ale. She has led a £63,000 project to restore the 18th-century bells of her local church with the help of a Heritage Lottery Fund grant, and is an avid reader of novels.

Louise said, “After 25 years practising primarily as an employment lawyer, I believe that I have been called to serve the church in this exciting and fulfilling role of Diocesan Registrar. I am very much looking forward to continuing to work with the Archbishop and the staff at Bishopthorpe and the Diocesan Office.”