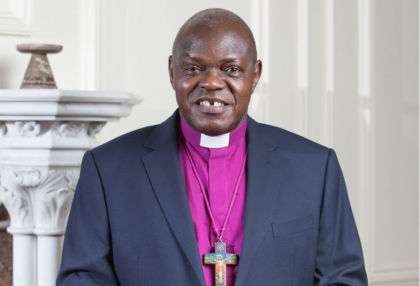 The Archbishop of Canterbury has paid tribute to the Archbishop of York on the final day of this month's Church of England General Synod, at what would have been his final Synod.

Archbishop Justin Welby praised the Archbishop of York who is currently travelling in the Pacific. He said: “He (John Sentamu) has gone to visit parts of the world which are suffering the effects of climate change right now. He has gone typically to respond to an invitation for him to go and preach and be alongside those who are suffering: a pattern of his life throughout his ministry.”

The Archbishop continued: “Speaking about Sentamu when he’s not here is both dangerous but also deeply liberating for it means we can show our gratitude, thanks and love for him without him being able to stop us.”

Recalling the Archbishop of York’s work on the Stephen Lawrence Inquiry, Archbishop Justin added that “he has said that he himself was stopped at least eight times by the police”. The Archbishop of Canterbury continued: “To honour his memory, his lifelong, bitter cruel and wicked experience of institutional racism which has existed and does exist within the Church of England we must be dedicated to actions not just words.”

Summing up the Archbishop of Canterbury concluded: “Thank you for being obedient to your call and to the voice of the Lord calling you to speak out and to speak up. Thank you for being you. Thank you to you and to Margaret for your example of love and service, dedication and sacrifice in so very many ways.” He closed by saying: “Let us try to show not only in our appreciation but also in our actions, that we will let his prophetic ministry bear its full fruit in our church.”