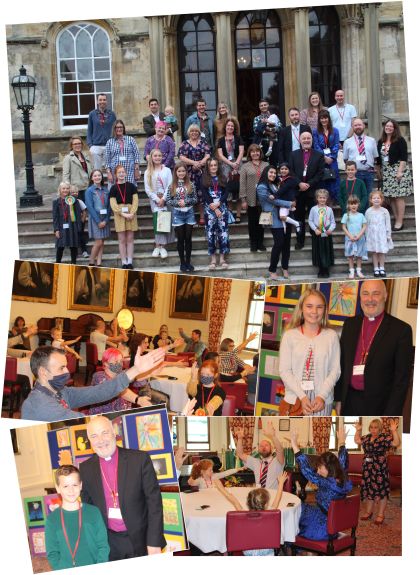 The sun poked through the clouds as winners of the Children of Light Festival Art Competition arrived at Bishopthorpe Palace on the 9th October with their parents to receive their prizes from Archbishop Stephen.

They were welcomed by Rebecca Cottrell and toured the Palace before the Archbishop presented prizes to the children and young people in the Great Hall. As the children received their prize, the judging panel's comments were shared about why they thought these pieces best illustrated ‘being light in difficult times’.

Before a splendid afternoon tea, the Archbishop showed the children and young people three of his pictures. The first was a picture of one of the illustrations from his book, 'The Sleep Shepherd'; a gift from the illustrator. The second was a modern piece that showed Jesus on the cross in the middle of a barren landscape. The third picture he had made himself and was of him lighting the Paschal candle from a bonfire that he and Rebecca had made in Bishopthorpe Palace gardens for their first, locked-down Easter there. All three pictures reminded him of Jesus the Light of the World, who came as a baby and whose birth was announced with a sky lit up with angels; who died alone on a cross, and who came alive again that first Easter Sunday.

The winners came from all corners of the Diocese and are looking forward to seeing their work exhibited alongside other shortlisted pieces as the Children of Light Festival Art Competition goes on tour: