Middlesbrough shoppers will be treated to an unusual sight on Saturday 22nd March. From 10am to 2pm, the Revd Ben Norton will be running on a treadmill in the town centre, dressed in full choir robes.

Ben, the assistant curate at St Cuthbert’ s, Marton in Cleveland, will be running the London Marathon on Sunday 13th April, and treadmill training is part of his preparation. He will be raising money to support The Children’s Society which works with vulnerable children living in poverty or at risk of neglect. 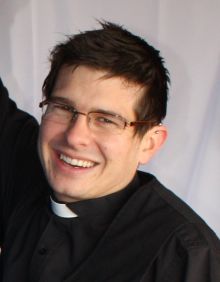 “I’ve never done a marathon before, so London’s going to be a real challenge for me! I joined the army recently as Padre of 4th Battalion the Yorkshire Regiment, so I’ve got to up my game in terms of fitness. I’m getting in lots of runs as practise, and the treadmill training is part of that.

“I’m raising money for the Children’s Society, which works with disadvantaged children across the country. I want to raise £2,000 for them, and running in full choir robes in the middle of Middlesbrough should get plenty of attention! I’ll be at the crossroads between the Hill Street Shopping Centre and BHS: I don’t mind if I get lots of stares, as long as people are donating lots of money!

“People can even choose what tunes I listen to on my mp3 player while I’m doing the marathon. If you sponsor me £20, you get to pick a song. Some of my friends have already picked some of my least favourite songs to torment me – I think I’ve been paid to listen to my least favourite Christian song ‘Shine Jesus Shine’ several times!”

Head of fundraising and marketing at The Children’s Society, Simon Burne said: “We appreciate the support of each of runners who dedicate their time to train for the London Marathon and Ben’s fundraising commitment is certainly impressive!

“The money raised by Ben and each of our runners will go towards supporting the work we do to make sure that every child has the best start in life.”

You can sponsor Ben and raise money for the Children’s Society by texting ‘REVB50 £20’ (or however much you can give) to 70070, or via www.justgiving.com/Ben-Norton2.

The Children’s Society wants to create a society where children and young people are valued, respected and happy. They are committed to helping vulnerable and disadvantaged young people, including children in care and young runaways. They give a voice to disabled children, help young refugees to rebuild their lives and provide relief for young carers. Through their campaigns and research, they seek to influence policy and perceptions so that young people have a better chance in life.