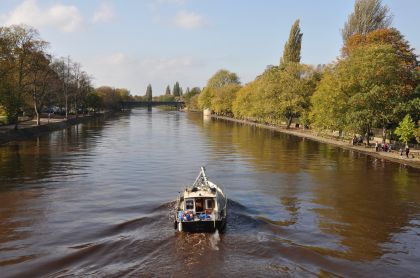 The Archbishop talking to Diocesan Synod about praying by the Ouse stirred the memories of David Wilbourne, Chaplain to Archbishop of York John Habgood:

When I worked at Bishopthorpe, on Christmas Eve I used to steal onto the dark terraces and sit by the swollen river, thinking of all that had flowed from Bethlehem over 2000 years.

We used to finish in the office around 9.30 pm, so again I would spend a few moments sitting by the river catching my breath before going home. I was once sitting there and I was surprised by a cleric, a very ambitious one, obsessed with being a bishop, who had decided to come and see the Archbishop by night to promote his cause. In the darkness he was about to walk straight into the flooded Ouse; he never became a bishop, but at least I stopped him drowning.

You could set your watch by the Evening Press barge coming up daily with paper for the presses. We used to ring the farmer who owns the fields/ings at the other side of the Ouse to tell him the waters were rising and his sheep were paddling. Archbishop John Habgood kept a little dingy in the cellar so he could paddle it around when the cellar was flooded to turn off the electrics and boiler. Guess things have improved since then!

The best story of course is where PM Ramsey Macdonald and Archbishop William Temple were sitting on terraces when a bargeman flowed by. ‘Glad to see you’re keeping better company today,’ he shouted. ‘I wonder which of us he means?’ Temple quipped.