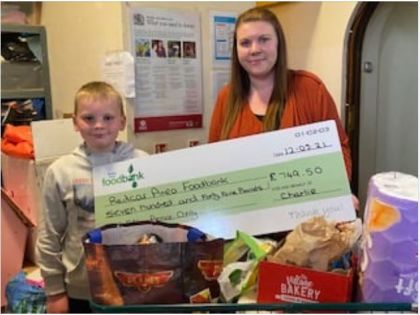 Over the last year of lockdown, many families have decided to take up walking in order to get the exercise they were missing. 9 year old Charlie Todd from Redcar decided to take it to the next level, raising £750 over Lent whilst walking 250 miles – 6.25 miles per day.

Due to missing out on his regular activities of rugby and swimming, Charlie decided that this Lent, he would take up something rather than give something up. With help from his mum, Lucy, he settled on walking a little bit further every day, as well as raising money for the Redcar Area Foodbank, where he helps out during the school holidays. An initial target was set for £100 – a target that was very quickly beaten!

What came next was regular updates on Facebook that garnered a surge of support. From there, the donations came pouring in. Soon, the money raised was standing at £750, an amazing amount to give to the foodbank, which had previously been struggling due to lockdown restrictions.

This has also provided a huge boost in morale for the foodbank, run by church volunteers and open in St Peter’s, Redcar, on Thursdays, and helps buy fresh food, such as loaves of bread to go with the home-made soup.

Charlie’s efforts have been met with a vast wave of backing from the community, with comments left on Facebook, a bag of goodies from his local sports shop, and a framed poster. His school has also recognised his achievement, with Charlie attaining the Head Teacher’s Award.

In a post thanking Charlie on Facebook, Redcar Area Foodbank said; “Charlie raised an amazing amount of almost £750, smashing his original target, by walking 200 miles during Lent. He handed over this fabulous amount along with a donation of food too. Thank you Charlie - you're a star!"