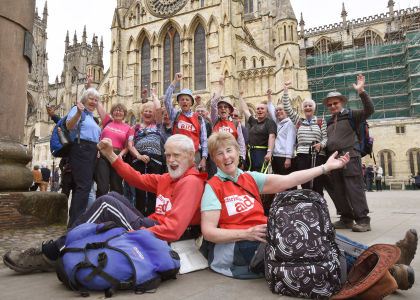 John Eckersley died peacefully on 4th January 2021 at home, in Flamborough, with his wife, Nancy and his daughter, Tanya.

John was always conscious of his calling as a teacher. He first taught in secondary school on VSO in the Sudan, then in Manchester, in York, in Jamaica, and for 25 years at St Aidan’s CE High School in Harrogate. At St Aidan’s he was also a lay chaplain, inspiring his students in practical Christianity through his somewhat wacky Assemblies and fund-raising activities, and earning himself the staff nickname of ‘Johnny Carport’.

After his retirement he continued following his calling as a teacher and fundraiser by heading up Summer-club activities for primary school children in York and continuing to take primary school assemblies as an official Christian Aid volunteer in York and then later in Flamborough, Bempton, Kilham and Scarborough when Nancy retired from stipendiary ministry.

He is best-known for his fund-raising activities for Christian Aid including his long walks, and his walking books published to benefit Christian Aid. John and Nancy have together raised around £200,000 for Christian Aid Projects in the developing world, through their sponsored walks and John’s books. They have walked about 33,000 miles (according to their grandson) during the process. The first long walk was an epic five month long Land’s End to John o’ Groats (covering 1,400 miles). This was followed by Carlisle to Bridlington, Dover to Carlisle, Dundee to Inverness (the long way around the coast) and Filey to York Minster. On these walks they visited and spoke and prayed in, churches, Cathedrals and Abbeys along the route.

In these pandemic times his funeral at St Michael’s Bempton on Monday 18th January has to be family only but there will be a Memorial Service when it is allowed.

Donations in John’s memory can be made to the Christian Aid Appeal for help to developing nations during the pandemic at
www.justgiving.com/fundraising/Nancy-Eckersley1

John’s books and epic walk blogs can be found at
www.johneckersley.wordpress.com

He leaves his wife Nancy, four children and nine grandchildren.