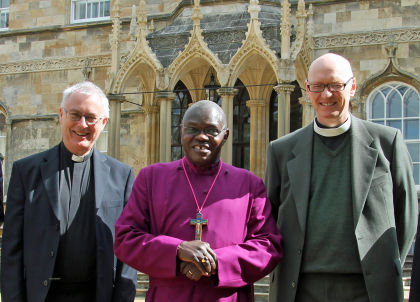 On Friday 2nd May, the Bishops were welcomed to their new roles by the Archbishop of York, Dr John Sentamu. They then visited their new Archdeaconries to find out more about the work done by churches in the Diocese of York.

The Archbishop of York, Dr John Sentamu said, “I am delighted to be welcoming the Revd Canon Dr John Thomson as Bishop of Selby and the Venerable Paul Ferguson as Bishop of Whitby. These are exciting times in the Diocese of York and I look forward to sharing with them what God is doing in the life of our Diocese.

“John is currently Director of Ministry & Training in the Diocese of Sheffield and brings with him a wealth of experience in encouraging the People of God in Mission and Ministry. I am deeply encouraged by his longing to see lives transformed by an encounter with Jesus Christ, and look forward to his Episcopal ministry as we seek to grow as Generous Churches Making and Nurturing Disciples.

“Paul is well known in this Diocese as the current Archdeacon of Cleveland and is a man of real commitment and godliness. I am delighted that he is willing to serve in this new role, and I pray that he will continue to encourage those in the Cleveland Archdeaconry, as well as people across the Diocese, to enable the Church to make a real difference in our communities.

“As we build up the Body of Christ in this Diocese, I pray that we will all grow in Christlikeness, Commitment, Partnership, Influence and Numbers, and that the Church will joyfully welcome all in this wonderful part of England.”

The Ven Paul Ferguson said, “It’s a great honour to be asked to continue to serve in the Diocese or York in a new capacity, and I’m looking forward to the fresh responsibilities and opportunities that I shall have as Bishop of Whitby. Penny and I will value your thoughts and prayers over the coming weeks and beyond.”

The Ven Paul Ferguson visited Holy Trinity Church, North Ormesby, Middlesbrough, to meet with members of the church and hear about the good work the church is doing in the community, as they prepared for their Foodbank distribution on Friday afternoon.

The Revd Canon Dr John Thomson said, “I am honoured to be invited to join the Diocese of York as Bishop of Selby and am looking forward to serving Christ with you. Please pray for Sue and I as we lay down existing roles and prepare to move and take up our new life among you.”

The Revd Canon Dr John Thomson visited the community café set up by the Edge Community Project in the Flaxley Road are of Selby. The cafe is in the Gypsy Moth pub, and people from across the community can come for a chat, help with finances, parenting advice and friendship. The Edge Community Project is run by St James Church, Selby, in conjunction with the Church Army. He then visited St Wilfred’s Church, Brayton, where members of The Zone children’s group will welcome John to his new Archdeaconry with some BBQ.

John was brought up in Uganda, is married to Susan and they have two adult children. His interests include cycling, choral singing, cooking and gardening. His published work explores the calling of the Church today in conversation with the Theological Ethicist, Stanley Hauerwas.

The Ven Paul Ferguson (aged 58), was educated at New College, Oxford, and then King’s College, Cambridge, and trained for the ministry at Westcott House, Cambridge. He served his curacy at Chester Saint Mary from 1985 to 1988 in the Diocese of Chester. From 1988 to 1992 he was Sacrist and Chaplain at Westminster Abbey, and Precentor from 1992 to 1995. From 1995 to 2001 he was Canon Residentiary and Precentor at York Minster in the Diocese of York. Since 2001 he has been Archdeacon of Cleveland and a member of the College of Canons of York. He is Warden of Readers for the Diocese of York, and a member of the Church of England’s Porvoo Panel which oversees links with the Scandinavian and Baltic Lutheran churches. He is author of Great is the Mystery of Faith: exploring faith through the words of worship (Canterbury Press).

Paul is married to Penny, who is Tees Valley Music Service’s co-ordinator for Redcar and Cleveland, and they have three grown-up children. His interests include music, walking, and Scandinavian language and culture.