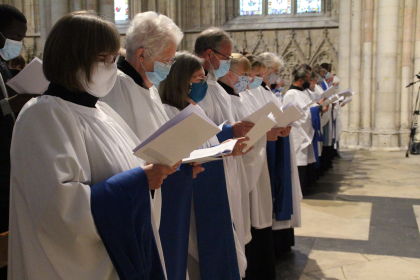 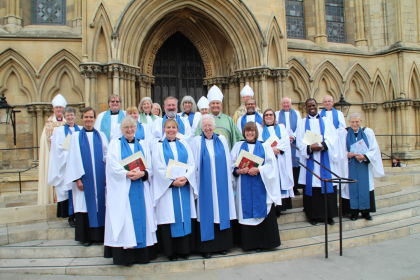 The Dean of York, Bishop Jonathan Frost, admitted eight new Readers to serve in parishes in the Diocese of York, during a service in York Minster on Saturday 16th October.

Readers (often identified by the blue scarf worn with their robes at some services) are unpaid lay ministers who lead acts of worship, and help reach others with the good news of Jesus Christ through explaining the Bible and Christian belief. Through their preaching and teaching and in their pastoral work, Readers help others grow through the Gospel message, and share in sustaining the Church’s work of caring for people in Christ’s name.

Diocesan Warden of Readers the Venerable Dr Amanda Bloor said, "It’s marvellous to be celebrating as we licence new Readers to minister in parishes across the Diocese. I’m inspired by their commitment to the communities that have helped to shape and encourage their ministries, and by the excitement they feel in sharing God’s love to the people they’ll meet. Their stories are often as much about being surprised by God’s calling as they are about study and formation and I’m thankful for each one of them and for their joyful witness to Jesus Christ."

Those admitted on the 16th October have trained with the York School of Ministry which involves both formational training and academic study.

The new Readers, with the parishes in which they will serve, are:

- Margaret Cooper will serve in Mowbray Deanery in the parishes of Brompton, Deighton, Welbury and the Rountons. As a vicar’s daughter and a vicar’s wife she has lived her life in houses lined with theological books, but never expected she’d actually want to read them!

After a career in Mental health nursing and as a Franciscan tertiary Margaret was praying on retreat and John 1 verse 39 spoke to her about staying with Jesus for the rest of the day.

Now semi-retired from nursing though working two days a week in the Memory Service, Margaret is a chaplaincy volunteer for her local hospital (although we are not yet back there after COVID).

“I have been hugely supported by the congregations of the benefices, York School of Ministry, my husband (who has also been my training incumbent) and by God our Father.

- John Edmond retired as a Solicitor after 38 years in 2018 and moved to Beverley with his wife Jill the following year.

John had started Reader Training at Leicester Cathedral in September 2018 and transferred to York School of Ministry in December 2020, completing his training at the Beverley Hub. As a Reader he will continue to serve as a member of the Ministry Team at St Mary’s, Beverley.

“I grew up in Hull in a close-knit and caring family who had little money. For a long time I have felt God calling me to help the poor, those in need and disadvantaged in life.

“My hopes and prayers are to bring the invitation to be part of the God’s kingdom to all who wish to hear the good news; that they may experience the embrace of His love, compassion and mercy.

“I want to develop, through my Ministry, my spirituality, commitment to prayer and service and glory of God.”

- Paula Evans works as a teacher for the Schools Music Service, delivering music lesson to pupils across the East Riding. She is also a Foundation governor and works regularly with three Church schools within the Deanery. Paula has completed her initial training for Reader Ministry with the York School of Ministry and will serve in Skirlaugh, Catwick, Long Riston, Rise, Swine with Ellerby and Sigglesthorne with Nunkeeling and Bewholme.

- Christine Fairless will serve at St Cuthbert's, Wilton-in-Cleveland; while she doesn't know when she first recognised her faith, she was always encouraged and supported and took on various roles and responsibilities in her church. Following a fallow period of some years she found the desire to return to church had been niggling for some time but Christine didn’t know where to worship.

"Then one afternoon six years ago I attended the graveside funeral of my neighbour. After the committal and on the way back to my car I noticed that the door of St Cuthbert’s Church was open, and I was given a gentle nudge to go in. I immediately felt that this was the right place and returned for the Sunday service a few days later. I am thankful to God for that nudge and for all the love, support and fellowship shown to me by every-one there."

Christine's hopes and prayers for the future are that "Whatever I do in the parish or further afield, I may show and live God’s love and be guided by His will."

- Elizabeth Furnell, born of a Christian family and now in her seventh decade, is still praying and still praising. She is a widow “with three wonderful daughters and three gorgeous grandchildren”.

“I worship and serve at St Cuthbert’s church Ormesby. Together with a group of talented ladies we visited residential homes for the elderly for a short service and sing-along; visits were stopped by lockdown.”

It was during her service in the homes that Elizabeth felt called to be a reader: “Bringing the love of Christ to those who were unable to attend church was humbling.

“The training course was hard and I thank all who helped me on my journey; I pray to serve God and the church as long as I am able. “

- Pauline Giddings will serve at St Mark’s, Newby (Scarborough). She trained as a Recognised Parish Assistant (RPA), but felt that this pastoral role continued shaping and challenging her faith.

“I tried to ignore the times that I felt I was being called realising that it’s impossible to ignore God, finally acknowledging that God’s been ‘nagging me’ for some time. So I finally decided to listen, give in and follow his plan for me!”

Pauline is a semi-retired registered nurse, having worked in different areas of healthcare throughout her career. Married to James, they have three children and four beautiful grandchildren.

Two years into study with York School of Ministry, Pauline applied for Reader training; she says she’s enjoyed all the studying and her faith has become much deeper.

“I hope and pray that my ministry will flourish in the community and in pastoral care.”

- Liz Russell will serve at St Helen’s church, Welton, where she’s worshipped for the last 36 years. She has been involved in Children’s ministry and now leads Messy Church, while enjoying study groups and becoming an RPA worship leader.

Liz had always felt called to be a teacher and taught maths in secondary schools, dropping to two days a week at the age of 60 and beginning to study with York School of Ministry. Two years in, she could not ignore the call to Reader ministry. Now fully retired from teaching, she is still studying, looking after her grandchild and involved in activities at church.

“As a Reader in training, preaching has been my new challenge and I have learnt to trust that the Holy Spirit will intervene to transform what I read on a Monday into a sermon by Sunday.”

- Dean Smahon will serve in the Parish of Rural Ainsty, west of York. Married with two young children, Dean has a passion for mission and evangelism, particularly within Rural communities, and he will take a principal role in developing and leading a new service at the local agricultural college.

Additionally, five existing readers who have moved from other dioceses will be licensed to serve in the Diocese of York:

- Michael Udeagbara will serve at St Martin with The Transfiguration, Hull

- Gareth Denby will minister in the Benefice of Derwent Ings (Wheldrake, Thorganby, Elvington, Sutton-on-Derwent and East Cottingwith, south of York)