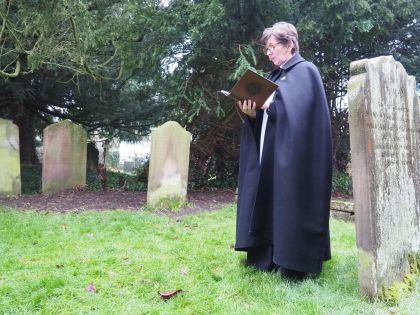 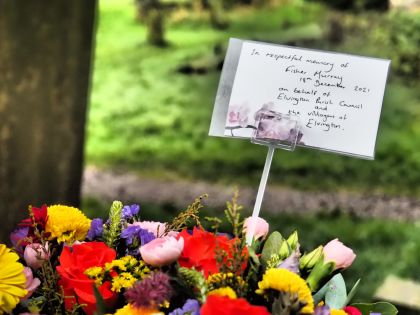 Fisher Murray, described on his headstone in Holy Trinity churchyard, Elvington near York as 'a faithful Black servant', died on the 18th December 1821, and was commemorated in a short service in the church there on the 200th anniversary of his death.

The term 'servant' was commonly used to mean 'employee' in the 19th century; we don't know in what capacity Mr Murray worked, but he could have been an agricultural or domestic worker. In a bygone age when life for ordinary people could be a tremendous struggle, being employed as a servant, particularly within the household, would have been considered an excellent opportunity. Despite long hours and hard work, it ensured comfortable accommodation, regular sustenance and smart clothing which was a luxury to many working class men and women in Britain.

Mr Murray's headstone records that he came from Madeira and lived for the next 60 years with the family of Thomas Cheap, a wine merchant and sometime Consul of Madeira, in Elvington. Thomas Cheap's son Andrew was ordained and built the previous church at Elvington, later replaced by the present building.

Nothing more has been discovered about Fisher Murray, but his carved headstone suggests that he was a valued and loved member of the household.

Speaking at the short service, present-day Vicar the Revd Jackie Doyle-Brett said, "So much of black history is untold, unheard, unacknowledged. But what do we know? We need to think about why people erect headstones, we do so in order that people can be remembered, acknowledged and because we care and respect them. This is what we are doing today in a churchyard with a single monument that records the ethnicity of a person.

"This headstone is a testament to a man who was respected and valued by the family he served for 60 years. His life and presence here is recorded and acknowledged, and so even though we know no more about him, about his life, his experiences, 200 years later we can give thanks for him as someone who was clearly valued by those he lived amongst, and as precious in the eyes of God, as we all are."