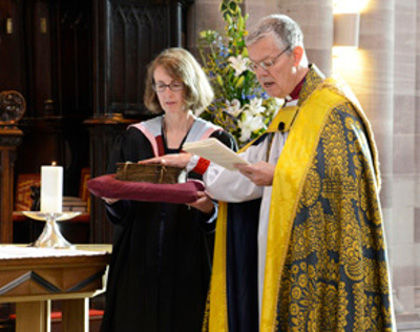 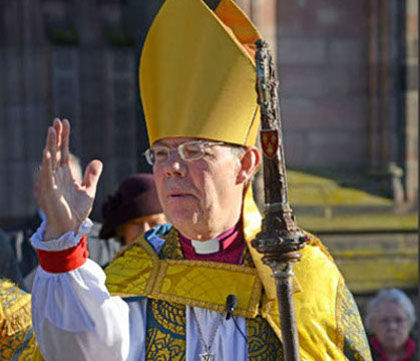 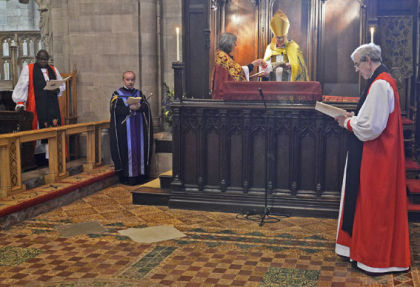 The Rt Revd Richard Frith, previously Bishop of Hull, was installed as the 105th Bishop of Hereford on Saturday 22nd November, and was presented to the Dean of Hereford, Michael Tavinor, by Archbishop Sentamu.

“It was a very colourful sight, and the choir excelled themselves so we got the sound right too” said Michael Tavinor, Dean of Hereford Cathedral, who led the service. “All the senses were engaged at some point. The anointing by four other Bishops was a very moving moment and with the provision of CCTV, everyone in the Cathedral could see what was going on.”

During the service Bishop Richard made his Declaration of Assent and Oath of Fidelity with his hand on the Hereford Gospels, which date from the 8th century. The Hereford Gospels is an illuminated manuscript with large decorative initial letters, probably produced in Wales, and part of the largest surviving "chained library" housed in Hereford Cathedral. The Declaration of Assent by a new Bishop is one of the rare occasions the text is removed from the Library.

Bishop Richard was anointed by two Tanzanian Bishops whose Dioceses are twinned with Hereford Diocese and by guest Bishops John Inge, Bishop of Worcester and Dr Alistair Redfern, Bishop of Derby. He was led to the Episcopal Chair by the Archdeacon of Canterbury, Sheila Watson. Bishop Richard left the Cathedral by the West Door to bless the city and the Diocese and to start work officially.

“It was a very moving service,” said Bishop Richard. “I was very nervous to begin with but it all went according to plan. It was a service full of symbolism and reflected the long history of the Diocese of Hereford. It was also amazing to meet so many people waiting outside the Cathedral and realising that I was being welcomed in a very special way. It was a wonderful start to my time here.”