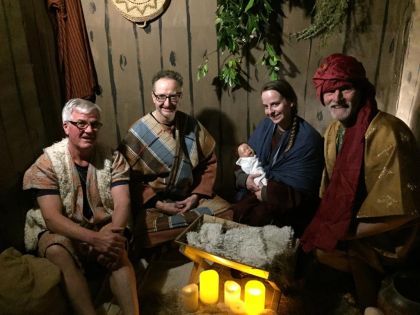 400 primary school children from around Malton experienced Christmas in a very real way during the first two weeks of December.

Accompanied by a ‘qualified’ time-travel guide, groups of children travelled back two thousand years to meet Mary, Joseph, a wise man and a shepherd called Tom. They learned about love, joy, hope and peace as they travelled from Nazareth to Bethlehem and interacted with the people they met.

After passing through a time portal, the children first met Tom, a shepherd who had just lost fifteen sheep. Tom went on to introduce the group to Joseph, who was busy in his workshop making things for his new home that he was getting ready for when he married Mary – the girl he loved. In pursuit of Tom’s sheep, the group then found Mary and witnessed an angel speaking to her and telling her that she was going to have a special baby who would be God’s son and would be called Jesus. Mary was full of joy after this encounter with the angel but Tom, who hadn’t seen or heard the angel, refused to believe.

The intrepid group next came across a wise man who spoke of prophets and the importance of having hope in your life. Tom refused to believe all that the wise man told him claiming that if he hadn’t seen something with his own eyes he wouldn’t believe it. The next time the children met Tom he was on a hillside outside Bethlehem and the sky filled with angels. Although Tom did see and hear these angels, he still refused to believe the message they brought, saying that it was nonsense. Tom and the children eventually made their way to Bethlehem town and found Mary, Joseph and baby Jesus. When Tom held baby Jesus he finally believed.

This ‘Christmas Experience’ was a truly memorable way of encouraging children to engage with the Christmas story and the visit was made complete with time for craft and refreshments.