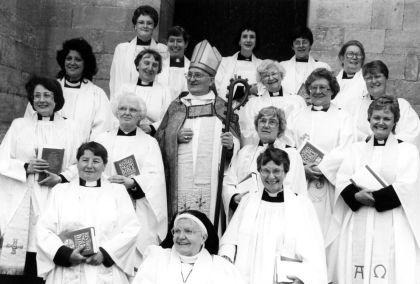 It may not seem very long but this year is the 25th anniversary of the first women priests being ordained in the Church of England; in York, 39 women were ordained priest in York Minster in May 1994.

Today, women make up almost a third of the 20,000 active clergy in the Church of England and over half of those beginning ordination training are women.

Some of those being ordained or licensed today, especially those who are younger, have no memory of a time when women could not minister in this way.

The two group photographs were taken on 14th (upper) and 21st (lower) May 1994; I was in the congregation at the second service and remember the great wave of joy when the newly ordained priests turned to face the people and there was a wonderful round of applause.

Three of the priests who were among those pioneers have written about their memories of the day (below).

In this anniversary year, please give thanks for all those who worked so hard to make this possible and pray for all women in ministry today and all the women and men who support us. 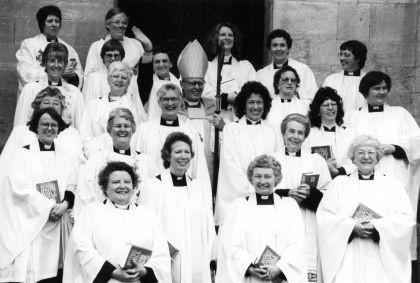 Reflections of the day are now a somewhat blurry memory.

Although I had rejoiced when General Synod voted in favour of the Ordination of women to the Priesthood I had been uncertain whether this was the right step for me so the 21st May 1994 was the end of a long and prayerful struggle with God.

I remember the Minster packed to the doors and being uplifted on a wave of love and support; seeing Christian Howard, who had fought long and hard for this moment, walking in the procession. The feeling of rightness that this step was the Lord’s will for His Church.

The mixture of joy and fear as hands were laid on me, and the thundering applause as we all stood and faced the congregation. Mingled with all was a sadness that some male priests and members of our congregations with whom we had been friends would now in some ways be estranged from us.

On the day it was hard to take in that I was now a Priest and it was only the next day, Pentecost, when I celebrated Holy Communion for the first time in Rosedale Abbey that the Lord overwhelmed me with an assurance of rightness, joy and gratitude.

David and I became engaged on that same weekend; 1994 was quite a year for us!

As I am now one of the team of Honorary Chaplains at the Minster I had the amazing privilege of being on duty on Tuesday - the exact anniversary of my Ordination - so I actually Celebrated at the lunchtime Holy Communion in the Lady Chapel, something I could never have dreamed of 25 years ago!

Looking back 25 years I find that the Women’s Ordination to the Priesthood in the Minster in May 1994 were, for me, a culmination of a much bigger story.

The start happened even earlier than the vote in the General Synod in November 1993. The number of women clergy in York Diocese was small enough for us all to know each other and meet up. Some of my male colleagues referred to us as ‘The Sisterhood’ and indeed the solidarity and support was important.

The then Bishop of Selby, the Rt Revd Humphrey Taylor, had invited the women Deacons in York Archdeaconry to watch the debate at his home, so I was able to rejoice with others when the cliff-hanging debate finally resulted in an affirmation of the call of women to the priesthood.

The following six months contained an interview for each of us (to ‘test’ our vocation to the priesthood). It also contained some training and a Retreat together at Wydale. All this was further building of the Sisterhood.

At both services there was spontaneous applause. It was very good to be at one Ordination on the 14th to support my friends and then to see my fellow women clergy, along with friends, family and members from the churches there to support me on the 21st. I had a new stole embroidered by the Banner group of my parish.

We were allowed to nominate just two priests to assist the Bishop at the Ordination, not always an easy task for us to choose, but a decision which meant each women’s ‘moment’ was clearly visible to as many as possible.

After the service we were shepherded out of the back door for a photo shoot from the press and there – the first to greet us – were women from the Catholic Women’s Ordination Group cheering and sharing our joy. 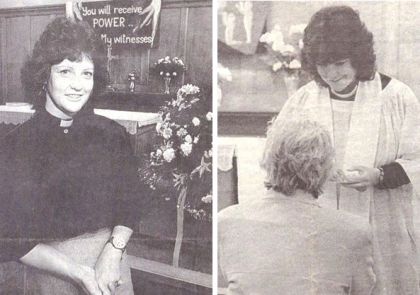 Even after 25 years I am not sure I can find the words to describe the emotions that day.

There was great jubilation. The joy was amazing. Everywhere you looked people were beaming with happiness. The Minster was almost bursting with it. I read one of the lessons at the service; standing at the lectern looking out at a sea of colour.

It was a celebration. There had only been seven years between my ordination as Deacon and this ordination as Priest but some of the colleagues I was Priested alongside had waited many, many years. They graciously served as Deacons but had longed to be Priests and weren't sure that it would happen during their serving lifetimes – I almost wonder whether the celebration was in direct proportion to the years waited. Amazing women such as the Revd Canon Catherine Durnford who has offered unstinting prayerful support throughout my ministry; the Reverend Canon Margaret Escritt, my DDO at the time; the wonderful Revd Joy Carr; and the late Revd Margaret Cundiff; all of them my role models.

There was spontaneous applause. Not so common in churches then, the congregation broke out into clapping directly after the ordination. The volume of this almost matched the shout that went out when the Rt Revd Donald Snelgrove had asked before the ordination, "Is it, therefore, your will they should be ordained as Priests?" And the congregation replied with a resounding, "It is".

There was a lot of hugging and a lot of tears. Tears of happiness, tears of relief, tears for the generations before us that hadn't had this privilege.

But in the midst of all this there was something else, and this is the emotion for which I can't find the right words. It was immensely humbling. Offering yourself up to follow in the footsteps of all the Priests that had gone before you, feeling their hands on your shoulder as you were ordained. Those who had been part of that journey with you gathering the closest round you so that when you looked up having been prayed for, it was them that you saw first. There was a feeling of unworthiness. Of not being 'holy' enough, of not being Godly enough, of not being worthy of all that lay ahead. And yet alongside that was a sense of God's Grace, an infilling of the Holy Spirit. A fulfilling of a calling, a vocation. One that had been tried and tested by the Church and was now coming to pass. A sense of Jesus presence with you. I have not done this feeling justice but it has carried me through 25 years as a Priest.

And then there are the more 'earthly memories' of that day. Dripping chocolate ice-cream down my front as I walked through York to the Minster, killing time. Our retreat had taken place earlier as we joined with those who were to be ordained the following weekend. There were just too many of us to get all our friends and parishoners into the Minster in one go so I had stayed with Revd Olivia Lambert the night before my ordination. Olivia was to be ordained the next weekend and to our amazement some years later we became colleagues in Hull! I'm fairly sure I was the only one hiding chocolate ice-cream stains under my cassock and surplice – one way to keep me humble!

Another memory was of the mad dash back to Hull. Manchester United were playing Chelsea in the FA Cup Final that day at the new Wembley and some of the guests wanted to get back to watch it. My future husband, Gary was driving the minibus. One of the passengers said she had prayed all the way through the service in the Minster and then even harder all the way back in the flying minibus! The local fire-station had cooked jacket potatoes for everyone and we watched MU (Manchester United, not Mothers' Union) win 4-0.

A lot had been made of me being the youngest candidate ordained in York, and perhaps that's why my celebrations were rounded of with a big disco at Sutton Golf Club where we danced the night away.

Just as moving as what had happened in the Minster though, was the next morning when I celebrated my first Holy Communion in St Aidan's Church, East Hull. As I offered up the bread – "The body of Christ broken for you." Then held up the wine – "The blood of Christ shed for you". And as I looked out at my precious flock I felt such an overwhelming feeling of love, and that has never left me. And to end the service with the words, "The Lord bless you..." nearly reduced me to tears.

That feeling came back to me years later when I was helping prepare the Revd Jackie Doyle-Brett for her ordination as Priest. We were going through the logistics of what you do when you Preside at Communion but we had to keep pausing. She said she couldn't get the words out because she had waited so long to say them. She was expressing with tears what I couldn't put into words on my ordination day – an overwhelming sense of privilege to be called to such a role, coupled with an incredible humility that I should be so blessed.