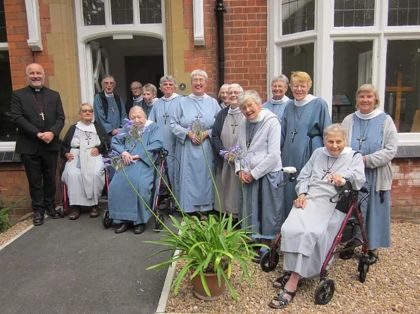 The sisters of the Community of the Holy Name (CHN) have recently moved into Hessle, East Yorkshire, in the Diocese of York after thirty years based on the outskirts of Derby.

CHN is a Community of Anglican religious sisters who live, work and pray together combining a life of prayer with service to others. Their outreach and mission is expressed in many ways: parish work, volunteering, working alongside others, retreat giving and spiritual guidance. The order originated in Vauxhall, south London in the 19th century, and from the outset has worked and lived in parishes working alongside the local church communities. In 1879 the Mother House of the Community moved to Malvern in Worcestershire where it remained for 100 years, with sisters also working out of various branches houses across the country from Newcastle to Torquay.

The order has houses in Kwa Zulu Natal and Lesotho which developed from work including witnessing in the face of the divisive apartheid regime being set up in South Africa, nursing, teaching and caring for those affected by HIV/AIDS.

Assistant Provincial Sister Catherine writes: "On 24th August 2021 the Community was pleased to welcome Archbishop of York Stephen Cottrell to our new home. Archbishop Stephen welcomed the Community to the Diocese of York and celebrated the Eucharist before joining us for lunch and the after-dinner crossword.