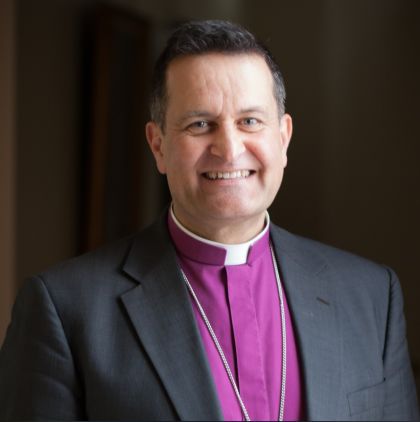 Downing Street announced this week that Her Majesty The Queen has accepted the nomination of The Rt Revd Dr Jonathan Frost, the Suffragan Bishop of Southampton, as the next Dean of York.

The Archbishop of York Dr John Sentamu said: “I am most grateful to Her Majesty The Queen for her approval of the appointment of The Rt Revd Dr Jonathan Frost as the new Dean of York. Jonathan brings with him a wealth of experience as a Pastor and Leader in mission - in parish, school, chaplaincy and cathedral. He will lead the Cathedral and Metropolitical Church of St Peter in York, in its mission to serve God in worship, witness and service across the Diocese and Province of York. We warmly welcome Bishop Jonathan and his family as they move from the Diocese of Winchester to be with us here in York.”

The Rt Revd Dr Jonathan Frost said: “I am delighted and honoured to have been invited to take up the role of Dean of York. I look forward to serving the Minster community, the Diocese of York and the Northern Province as together we seek to proclaim the Kingdom of God and to reflect the radiant goodness of Jesus Christ. May I ask for your prayers for me, for Christine and for our family as we move to York.”

“I am delighted with the appointment of Bishop Jonathan. He is a person whose life is deeply rooted in prayer; he has a passion for mission; and as a bishop he is someone who is recognised as being a focus of unity. This combination of giftings will enable him to build on and consolidate the developments that have taken place recently and under God to lead York Minster into its next phase of ministry.”

Right Worshipful Peter Collier QC, Chair of the Nomination Panel for the Dean of York

The Rt Revd Dr Jonathan Frost, the Dean designate, was at York Minster throughout Monday to meet with the Chapter, staff, volunteers and visitors.

Jonathan Frost (aged 54), was consecrated Bishop in the Church of God to serve as the Suffragan Bishop of Southampton and Installed as Canon at Winchester Cathedral in 2010. He has also served as Anglican Chaplain to the University of Surrey, and as Canon Residentiary of Guildford Cathedral. In 2007, he became Co-ordinating Chaplain at the University and was appointed the Bishop of Guildford's Advisor for Inter-Faith Relations. He is a Benedictine Oblate and follows a Rule of Life.

The installation of the Dean designate will be held on Saturday 2 February 2019 at York Minster.

From 1997 to 2002 Jonathan was Rector of Ash in the Diocese of Guildford. For eleven years he was Tutor for Christian Doctrine on the Diocesan Local Ministry Programme. From 2002 to 2010, he was Residentiary Canon at Guildford Cathedral and Co-ordinating Chaplain to the University of Surrey. At this time he was elected to the Church of England’s General Synod.

Since 2010 Jonathan has been Suffragan Bishop of Southampton in the Diocese of Winchester. Here he has served as Chair of the Joint Diocesan Board of Education (with Portsmouth Diocese, where he is also an Honorary Assistant Bishop); and as Chair of Love Southampton, an ecumenical network of churches in the City of Southampton working with the City Council on areas of social need. Jonathan is Episcopal Visitor for Hopeweavers, an acknowledged Anglican Religious Community.

Jonathan is a Trustee of USPG, an Anglican Mission Agency. In 2015 he was elected to represent the Suffragan Bishops of the Province of Canterbury on General Synod.

Jonathan’s emphases in ministry include: Christian unity and mission; contemplative prayer, evangelism and discipleship, inter-faith relations and action for social justice. He is committed to ministry amongst children and young people.

Jonathan is married to Christine, a teacher and therapist in training. They have three grown up children. He is a lifetime supporter of Fulham Football Club and follows Test cricket. He enjoys time spent with friends, live music, reading and is a keen walker.