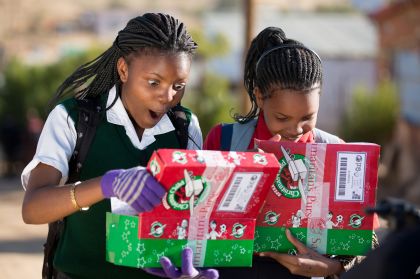 November is such a time of giving. At Remembrance, we pay tribute to all those who paid the ultimate price by giving their lives in service of their country in conflict. We rally around the BBC’s wonderful annual flagship ‘Children in Need’ appeal, and some of us even decide to grow hair on top of our lip to raise funds as part of ‘Movember’ and the raising of awareness and funds about men’s health issues.

And then there’s Operation Christmas Child.

Since 1993 the charity, run by international Christian aid relief organisation Samaritan’s Purse, has collected shoeboxes full of gifts which are donated by the people of the world and sent as Christmas presents to children of all nations.

These children would otherwise receive nothing by which to celebrate the special time of year.

In Scarborough last year, 5,026 shoeboxes were sent abroad - to Moldova and east Africa - as the tally of boxes sent from the UK soared past the half a million mark.

This year the charity aims to reach even more children, many of whom live in desperate conditions of poverty and isolation, some with no family and in danger from disease - and the bullet.

‘We do this each year to show the children of the world that we love them, even if we don’t know them,’ said Rob Garner, the coordinator for this year’s appeal on the coast.

‘When you read and see of the conditions many of these children face, your heart bleeds. There is little joy in their lives … we aim to change that. We see pictures of the smiles and excitement on children’s faces when they open their boxes at Christmas. That’s why we do it.’

Each year the charity ask the public of Scarborough and the Yorkshire coast to pack boxes and fill them with gifts, ranging from school supplies, of pens, pencils, writing and colouring materials, solar calculators, to hygiene items, such as toothbrushes (but not toothpaste), soap, flannels, and small toys, hats, caps and scarves.

‘We’re so overwhelmed by the kindness and generosity of so many people who give for the children,’ said Rob. ‘This area has played such a massive part in the Operation Christmas Child effort both regionally and nationally over the years. We cannot thank the public enough.’

Operation Christmas Child’s national collection week is from November 11-18. They have a national website which tells, in stories and on video, of the work of the charity and how they say lives can be changed.

The Scarborough team of volunteers have their own Facebook page, at https://www.facebook.com/charityshoeboxScarborough