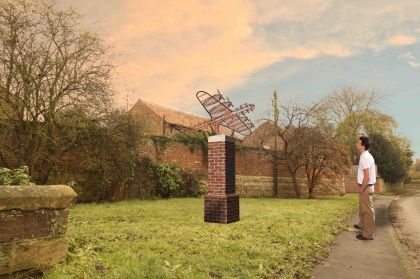 The Bishop of Selby, the Rt Revd Dr John Thomson, will be leading a service at The Epiphany, Tockwith, to mark the 70th anniversary of the Stirling Bomber which crashed in the main street of the village. The service will be held on Sunday 11th October at 2pm, and will include the unveiling of a new memorial to those who died in the crash. Music will be provided by Thirsk Royal British Legion Band, and the memorial will be unveiled by the Deputy Lord Lieutenant for North Yorkshire, Sir Ronald Cooke.

Descendants of those killed in the crash have been invited to attend, and representatives from RAF Linton on Ouse, the ATC, British Legion, Police and Fire Service will also be present.

The Chairman of the Parish Council Norman Waller said “"The aircraft crashed in Marston Road flying West to East and initially demolished the Post Office and the Police House. It then bounced over the Chapel and Northfield House and into Swires grocery shop and adjacent buildings. It then bounced again over Melbourne Stores and hit Cromwell Cottage and Nicholson’s butchers shop. The post master Arthur Carlill who had been sleeping in the attic room at the Post Office was killed as was the entire crew.

"The site chosen for the monument is close to where the main impact of the crash was; in fact some of the nearby trees are reputed to have pieces of the crashed aircraft still in them. It is felt that the monument is very striking and will have sufficient impact to act as a long overdue lasting memorial."

There will also be an exhibition about the crash in Tockwith Church on Saturday 10th October from 10am to 4pm when Brian Lunn, an authority on the crash and RAF Marston Moor, will be on hand to answer questions.